Another attempt to digitise Home Affairs records on the cards! 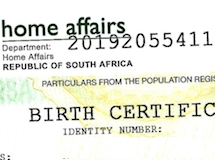 During his 2022 SONA address, President Cyril Ramaphosa announced that beneficiaries of the Presidential Employment Stimulus would be among those recruited to help digitise Home Affairs records that are still in paper format.

The President said ten thousand unemployed youth would be hired to undertake the task of inputting the records into the DHA’s digital system.

According to Minister Dr. Aaron Motsoaledi, there are paper files at the DHA that date as far back as 1895. He said that these paper records amount to more than 300 million files. According to Motsoaledi, SARS has already begun the job to digitise Home Affairs records, but budget constraints only allowed for the digitisation of 5 million records per year. At that rate, it would have taken more than 60 years to complete the project.

The aim of recruiting 10,000 unemployed graduates is to ensure that these records will be digitsed within the next three years. The DHA plans to recruit graduates that completed their studies in the field of IT.

Why is this important?

Whenever a South African citizen is born, the original registration paperwork is stored at the archival offices of the DHA. The same process is followed when someone gets married or death is registered. These documents, which are stored in the vault, are proof that certificates issued to South African citizens contain the correct information.

As the name implies, a vault copy is an authentic copy of the original registration form. The “vault” is merely the name for the archives where these documents are stored. One can have vault copies for a number of documents. But usually, only birth, death, or marriage certificates are required by South African citizens. Divorce decrees are held by the High Court in which the divorce order was granted.

The problem, however, is that obtaining these typed-up records is a very time-consuming process.

How long does it take to retrieve documents that are not digitised?

When applying for these records on your own, it can take a few months to obtain the copies. And in rare cases, it can even take years. The process is further delayed by the fact that courier bags need to be filled up before they are dispatched to various branches of Home Affairs.

In the event that the DHA is unable to retrieve your documents from the vault, they might attempt to search for the document a second time. But after this attempt fails, the document will be classified as lost. This is why it is absolutely imperative to take good care of your original documents. We urge our clients to make your their copies of them (hard and digital format copies).

What will the digitisation of paper records at DHA mean for South Africans?

The hope is that the digitisation process will make it much easier to trace original documents. Instead of spending endless hours and financial resources going through the vaults, the DHA will simply be able to look into digital copies of the documents in question. How soon will we be able to see the benefits of this initiative? Well, that remains to be seen.